You’re a man on the go. You care about your style. You always look well-groomed, but all that shaving cream, hot-towel nonsense just doesn’t work with your schedule. You want to flip a switch and subdue your stubble, grab your brief case and get out the door. Obviously, for the jet-setting man, electric is the way to go.

However, finding the best electric shaver can be tough, so we’ve put together this resource – a one-stop-shop, all-inclusive guide to help you find the electric razor that fits your face. (P.S. This guide is for electric shavers, not trimmers; if you’re looking for electric trimmers, check out this guide).

Ultimate Guide to the Best Electric Shaver For Men:

The Different Types of Electric Razors:

Electric razors come in two varieties: foil and rotary. We’re not going to get into the debate about which is better; they both clearly work, and it really boils down to personal preference. This is an example of a foil razor. It has 2-3 long, straight foils that cover cutting blades. When the razor is on, hair enters through holes in the foil, and the blades move back and forth to cut the hair.

This is an example of a rotary razor. This type of razor usually has 3-4 floating, round heads. Remember when you were a kid, and your mom told you not to stick your finger in the fan? Well, the same principle is at work here. Under each head, a blade spins around in a circle, cutting the hair. This is pretty much like shaving your face with three miniature lawnmowers.

The Advantages of Using an Electric Shaver:

First let’s start off with the advantages.  There are quite a few but we will focus on the most obvious advantages that you have by going this route over a straight razor or wet shave.

The Disadvantages of Using a Power Razor:

Now let’s tackle the Cons.  While there are probably more disadvantages, below are the top 3 that most consumers complain about.

This really comes down to personal preference, but most individuals end up doing a dry electric shave just due to habits that have been formed over the years.  That doesn’t mean a wet shave is out of the question.  There are plenty of electric shavers that will accommodate both a wet and a dry shave.  The wet shaves can actually be more efficient for those of you that don’t like to waste time by actually sitting in front of the mirror during a dry shave.

Some people have even said that doing a wet electric shave can get you closer than any other type of shave that’s out there today including a shave from a straight razor.  Ultimately this is a personal choice, but if you think you might go the wet shave route, you should look at picking up the right model that will allow you to have the versatility shave both in and out of the shower.  You might spend slightly more, but at least you won’t end up locked into one way of shaving your face.

Reviews of the 5 Best Electric Shavers: 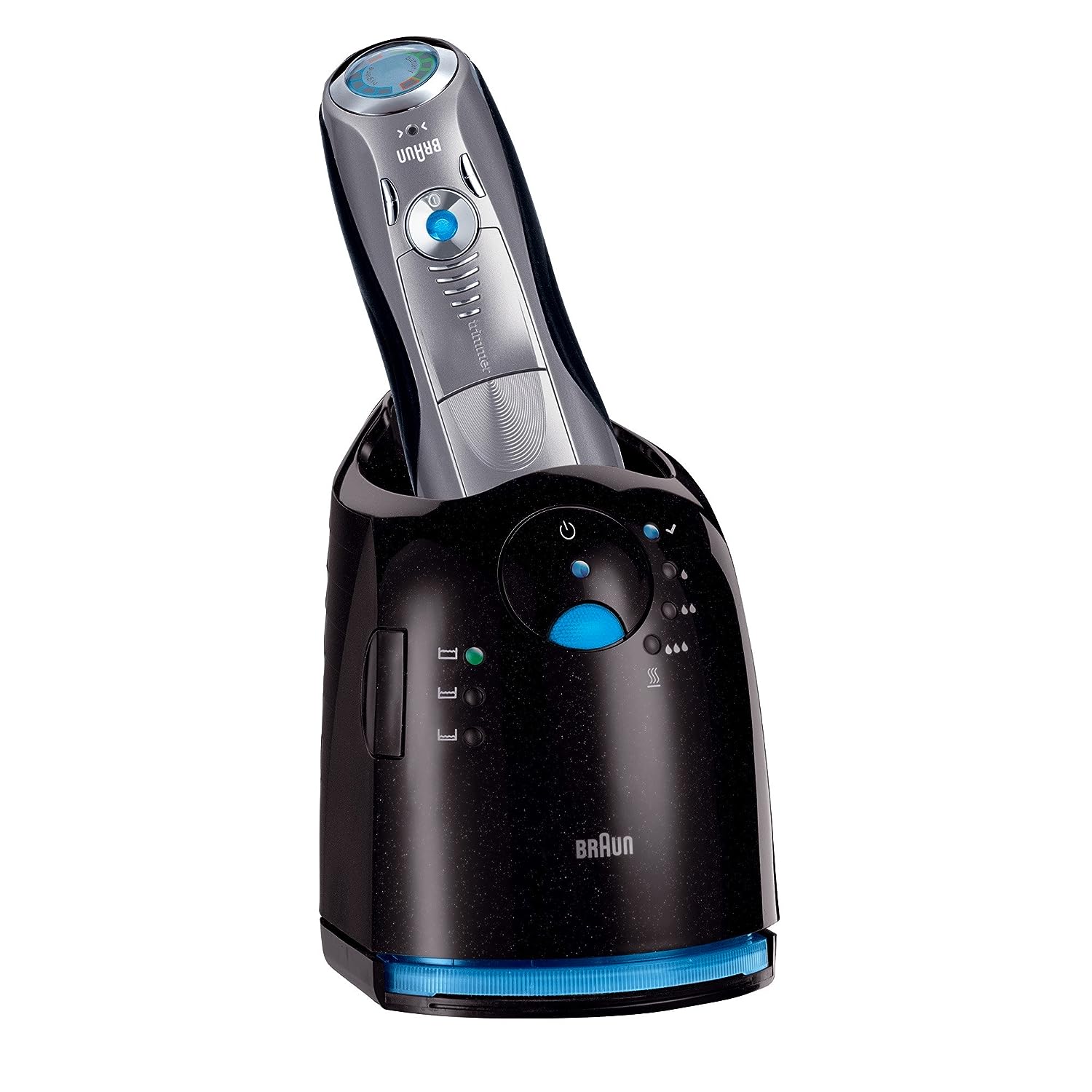 The Braun Series 7 is one of the best shavers on the market. Most forums agree. We personally think it’s the best, all things considered. Most importantly, this razor gives you an excellent shave. Braun likes to brag about its patented “pulsonic” technology, which basically means the blades vibrate really, really fast – up to 10,000 strokes a minute, in fact. This translates to a super smooth shave with very little (if any) tugging and pulling. I mean, think about it: if you’re swinging a sword, the faster you can whip it around, the easier it’s going to cut through stuff. Same concept.

Additionally, it’s 100% waterproof and has a nifty LCD display. That doesn’t affect the performance, of course, but I’ll be damned if it doesn’t make you feel a little like a fighter jet pilot – or Tom Cruise in Minority Report. It’s just one of the cool bells and whistles on this thing. It also comes with a really great cleaning system, which accounts for a lot of the cost. At around $200, the price isn’t anything to sneeze at, but this is a very well-engineered razor, and it should last you a long time. 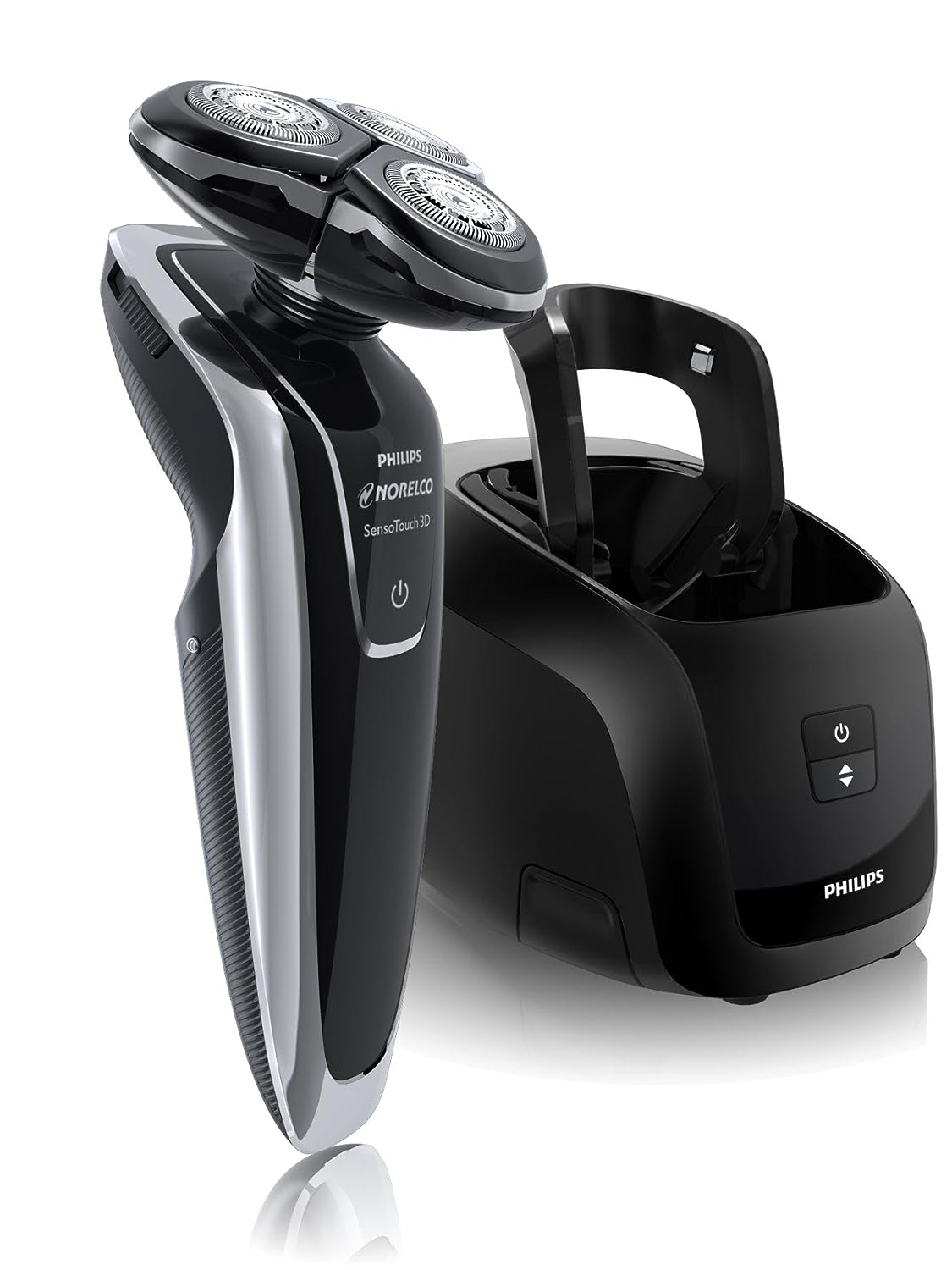 The Philips Norelco 1280X 3D is one of the best rotary razors out there. It’s another expensive one, but again, it’s very well-engineered and would be a great investment for anyone who doesn’t want to buy a $40 razor every year or two (believe me, I’ve been there).

So what’s so special about this bad boy? First of all, like many high-end razors, you’ll get a charging base and cleaning station. Unlike other razors, the cleaning station is one of the better features of this razor. It’s a super efficient combination cleaning-charging station that really gets the job done and significantly cuts down on maintenance.

The design of this razor is great as well. Ergonomically speaking, it’s really well-conceived. It basically feels like a joystick. Or a throttle. Or a phaser. Nice. The defining feature of this razor, however, is the “GyroFlex” 3D head. Not only does the whole head pivot, but each rotary blade pivots as well, so it conforms to your face super well, which makes for a very close, very comfortable shave. 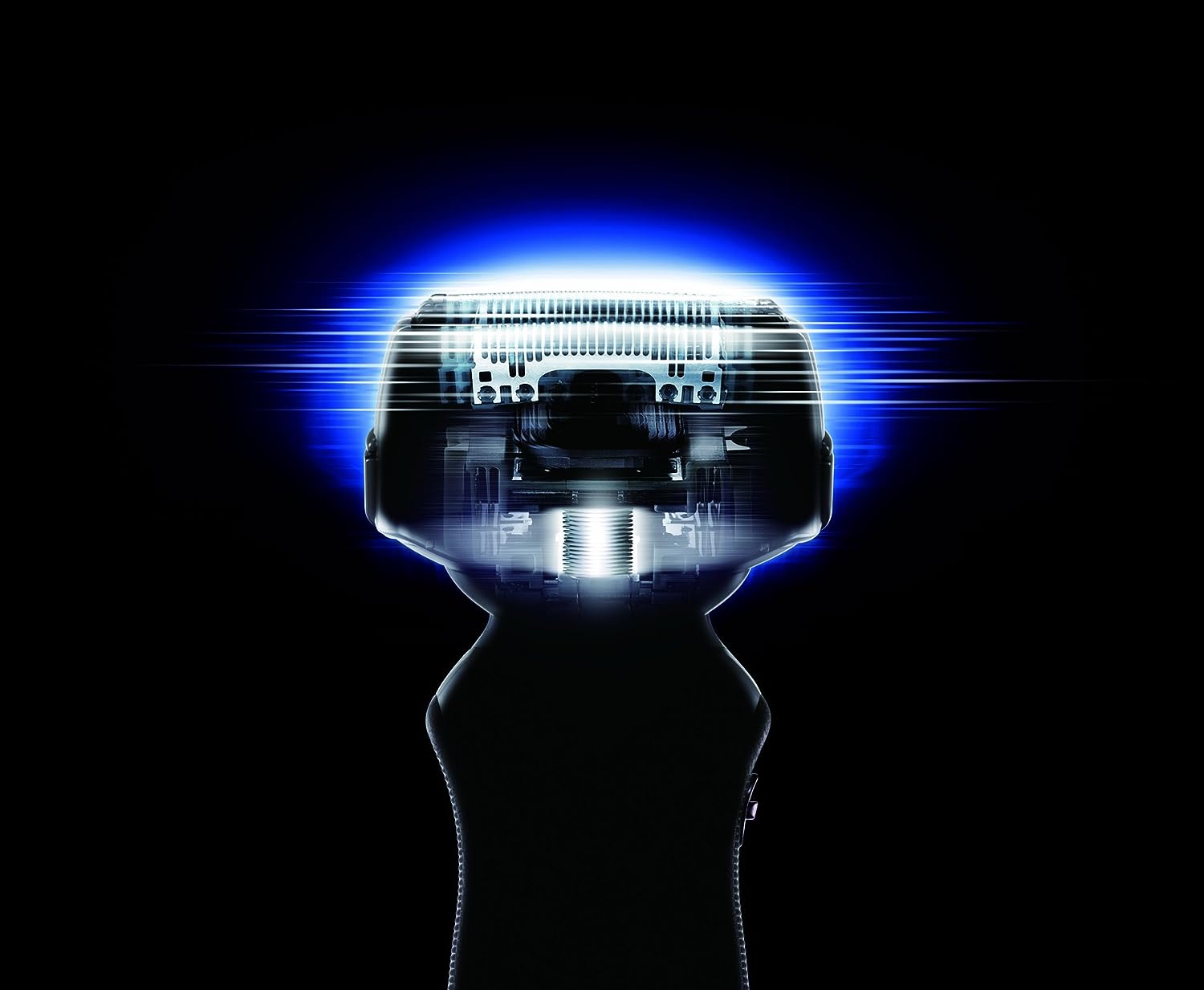 The Panasonic ES-LF51 is a 4-blade foil razor that shaves wet or dry. The four different blades don’t make a ton of difference, but we did notice they yielded a bit closer of a shave on the first pass than some other razors. The head is adjustable as well, which is great for shaving your neck and jaw line. The razors oscillate at 14,000 strokes per minute – even faster than the Braun Series 7, so you can expect a smooth shave. Unlike some of the other razors on this list, you get a travel pouch and AC adapter, so it’s easy to take with you.

You may be asking yourself what this razor is doing on the list. It’s clearly outclassed by most of the other top 5. So why did we list it? Price. It can be surprisingly difficult to find a decent razor that won’t totally break the bank. The Philips Norelco PT730gets the job done for around $50. It’s one of the best razors at this price point, and it’s a good entry-level razor if you want to test the waters before upgrading to something a little more sophisticated.

The SensoTouch 2D is a slightly less expensive, slightly less sophisticated version of the 3D. This razor is a bit bulkier and a lot less sleek. You don’t get the same futuristic feel from the 2D’s design.

So what’s makes this 2D? Basically, the head flexes in two directions. The neck pivots 360 degrees, and the three rotary blades all flex toward the center, a bit like a catcher’s mit. The blades on the 3D, of course, can all flex outwards as well as inwards. The only other real difference between the two razors is that the 3D is a bit better at shaving long, flat-lying hairs. However, they are both great a shaving stubble, and the 2D is about $100 less.

Now that we’ve given you the nitty gritty details of the benefits of going electric versus the wet shave, hopefully  you’ve got a good place to start.

Whether it’s a gift for your dad, significant other or you are just picking out your first electric razor, we are confident that any of the choices that we’ve laid out for you will do the job that you need it to do.

All of the products we’ve broken down for you are the top of the line electric shavers that you can buy and we are confident that they will stick with you for the long haul no matter which one you choose.